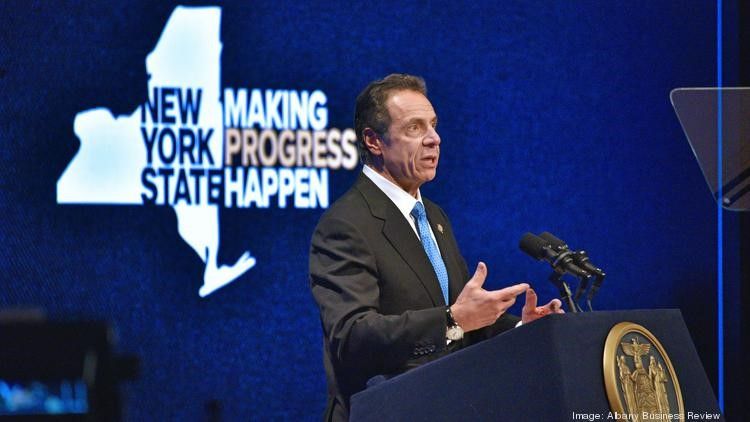 Governor Andrew Cuomo delivered the annual State of the State address to members of the State Legislature and top officials on Wednesday afternoon. “Making Progress Happen” was the theme of the Governor’s 10th message which he delivered at the Empire State Plaza in Albany.

The speech highlighted several major achievements over the past year including components of the progressive agenda accomplished by both the Executive and Legislative branches in 2019. With the help of a Democratic-controlled Assembly and Senate, the Governor touted his ability to advance significant economic and social justice reforms. His policy platform for 2020 remains progressive and ambitious despite a looming $6 billion deficit going into the new fiscal year.

This year the Governor will focus on efforts to strengthen New York’s infrastructure, promote the workforce, address climate change and implementation of measures to combat domestic terrorism. He also proposes ongoing efforts to help the middle class by lowering the Personal Income Tax rate, expanding free college tuition to include families earning less than $150,000, and expanding eligibility for the Empire State Child Tax Credit.

The State Budget Gap and Medicaid

The majority of the Governor’s address highlighted major initiatives that, for the most part, were positive and solution and goal oriented. What was missing from the speech were specific details as to how the Administration will address the current multi-billion budget deficit. The Governor referenced the $6 billion gap attributable to New York’s Medicaid costs and alluded to the 6-year old agreement whereby the counties’ share of Medicaid was capped and the State had assumed the local share increases. Likewise, the Governor offered that the State faces additional cuts from the Federal government of which the NY Alliance understands may also be directed at the Medicaid program. He also offered that the Medicaid Redesign Team efforts of the past had restructured Medicaid and that the state must do this again. The NY Alliance will alert members as to the Executive’s plan to address the deficit and how such decisions may impact the State’s Medicaid program.

Of particular interest to NY Alliance members, the Governor proposes to build upon the success of the Workforce Development Initiative by expanding its apprenticeship program for New York’s businesses and underserved communities. The NY Alliance expects this initiative will be funded in the proposed 2020-2021 Executive Budget slated for release later this month. Additionally, funds will be included to launch two “Future of Work Centers” to create new short-term, non-degree credential and micro-credential programs to address employer skill needs for current and new workers and Round 10 of the Regional Economic Development Council awards.

A new state of the art workforce training program will also be created that will offer high school equivalency, advanced technical certification and college degrees to enter emerging workforce sectors.

While the Governor’s remarks did not contain all proposals and initiatives in the 2020 State of the State, the 321-page State of the State Book provides specific details of the policy platform some of which we will understand better when the proposed 2020-2021 Executive Budget is released in the coming weeks.

The Governor’s webpage contains other materials related to the State of the State including the official press release and the Governor’s prepared remarks as delivered Wednesday afternoon.

The State of the State address marks the beginning of the 2020 Legislative Session. New bills are being introduced and we expect committees to begin meeting. The proposed 2020-2021 Executive Budget will be released on or before Tuesday, January 21st and we expect the State Legislature’s joint budget hearing schedule to be announced shortly thereafter.

The NY Alliance will continue to provide members with important updates on the Governor’s 2020 Policy and Budget Platform as the release of the Executive Budget nears.